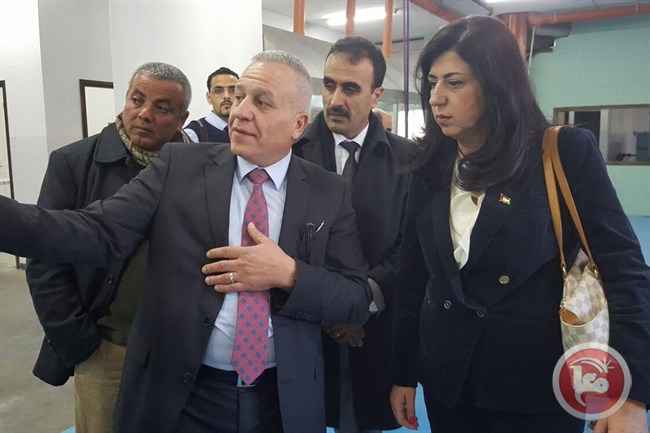 Hebron – Ma’an – The Minister of Abeer return of the national economy, accompanied by a delegation from the ministry’s inspection visit to Qawasmi jewelry company’s headquarters in the city of Hebron, where he was received by the company’s general director, Ahmed Qawasmeh, and Chairman of the Chamber of Commerce and Industry of Hebron Mohamed Ghazi Herbawi and president of the Federation of Plastic Industries Ahmed Hassouna and board member of the Hebron Chamber of Zoughair Mazen, and directors of the company and its staff.
The Qawasmi minister and the delegation allowed a tour of the company which is the first of its kind in the formulation and manufacture of gold in the home sections, and gave her an explanation about the nature of the work done by the company and its leading role in the profession of goldsmithing, and toured the company’s departments.

In his speech Rahibah, Qawasmi provided an overview of the company in terms of incorporation and the nature of the work being done, Marja on the reality of the gold profession in Palestine and the evolution of the past nuclei, indicating the presence of 62 facility in Hebron, engaged in the formulation of gold, pointing to the national income, which It provided this profession where it ranks second after Qzaa stone in terms of national income, stressing that the Hebron facilities covering 95% of the national market needs, and pointed out that Odahab gold facilities in the country are ready to export it abroad if given the chance, and he stopped Speaking on the problems and difficulties faced by the gold sector in Palestine.
For his part, Hirbawi occur, and as head of precious metals Union in Palestine, the amount of investment in this profession, noting that it exceeded the hundreds of millions of dollars, and praised the decree of the late President Abu Ammar, as gold material savings tax-free, and calling it a wise decision and he touched to talk about the reality of the profession, noting that it is the most economic sectors in the country organized, in a clear reference to the transmission sector to export to the world stage thanks to the skilled hands and investments in, and provides the industry in Palestine from neighboring countries.

He called Hirbawi and Qawasmi, the Minister of Economy, find a solution to the issue of import and export of gold, since Israel is considered gold a commodity subject to taxes, has confirmed the existence of an interview with the Israeli side through the Palestinian Ministry of Finance, to push for the import and export of gold, and stressed the importance of making adjustments and intervention by the Ministry of economy in cooperation with the competent authorities concerned and to overcome this obstacle that limit the development of the industry and its transition from domestic production of global production stage.
From her part, the minister Abeer, proud Palestinian industries and the development he has reached, thankful that the private sector’s efforts in the development process and development, said: “This sector of the important in Palestine economic sectors, and will work in cooperation with the competent authorities for the development of solutions and overcome the obstacles facing the development of this industry, and come up with recommendations that can be implemented, and we hope to overcome the obstacles. “